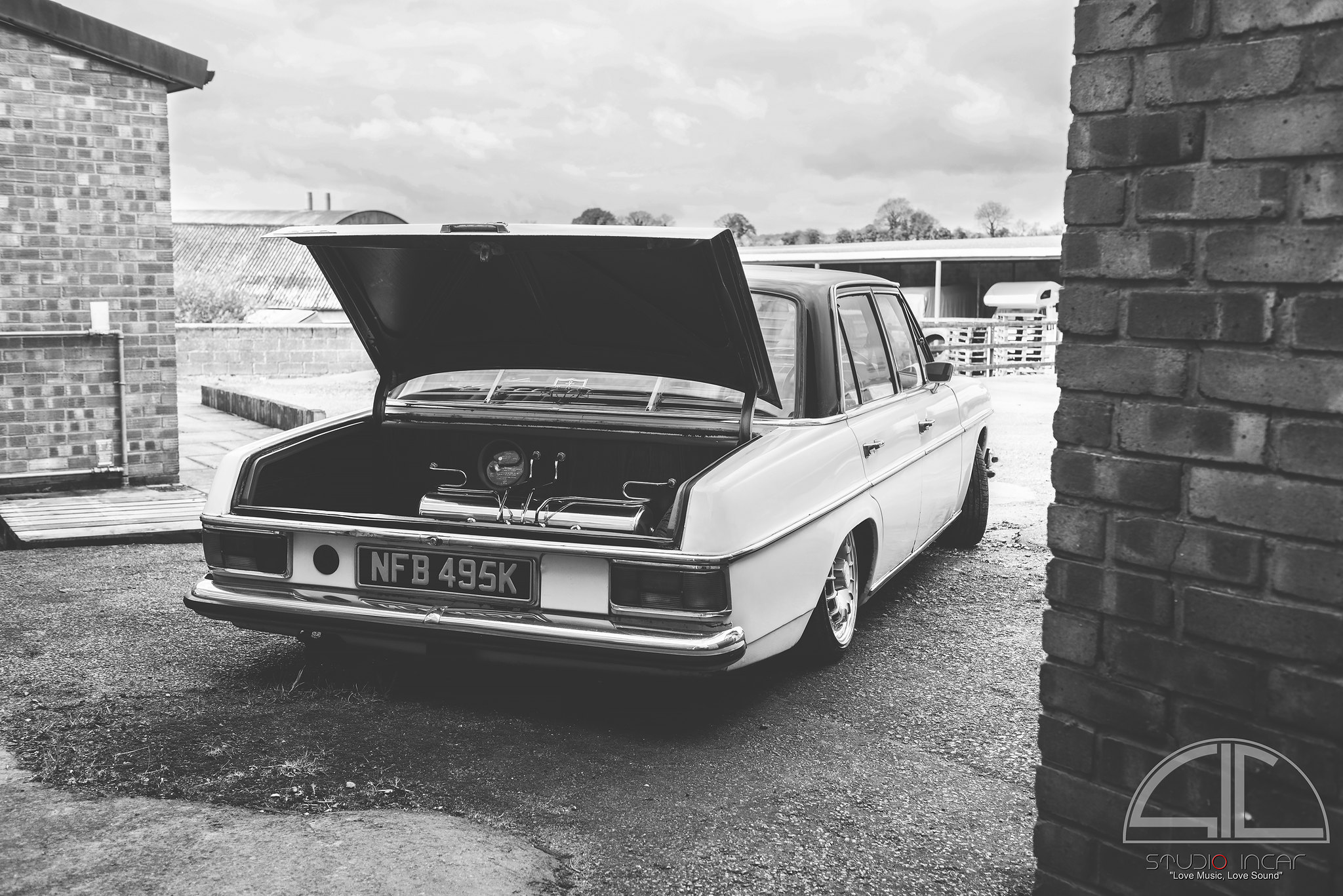 Now, a little history of Ian, a lot of you will probably know him as he can put together a decent car or two… Even more of you will know about the disastrous circumstances that lead to the new purchase of this old benz. For those that don’t, Ian used to have an incredible award winning E36 M3 EVO (I’m a huge fan of this platform) and still has an e21 3 series.. These car’s were cared for, worked on by the best in their respective markets and just generally pampered, you know the type of looking after that makes other people/none car types think you’re a bit weird…

He’s far from weird, just a die hard car lad who didn’t deserve to lose almost all of these prized possessions in a garage fire that pretty much took the double garage with it. The M3 was a total loss and the e21 badly smoke damaged, Unimaginable for most of us.

So, this project for us holds a certain significance as it’s not really a simple indulgence any more, like most of us have. Its more “sticking it to the man” for us, doing the others justice if it were… 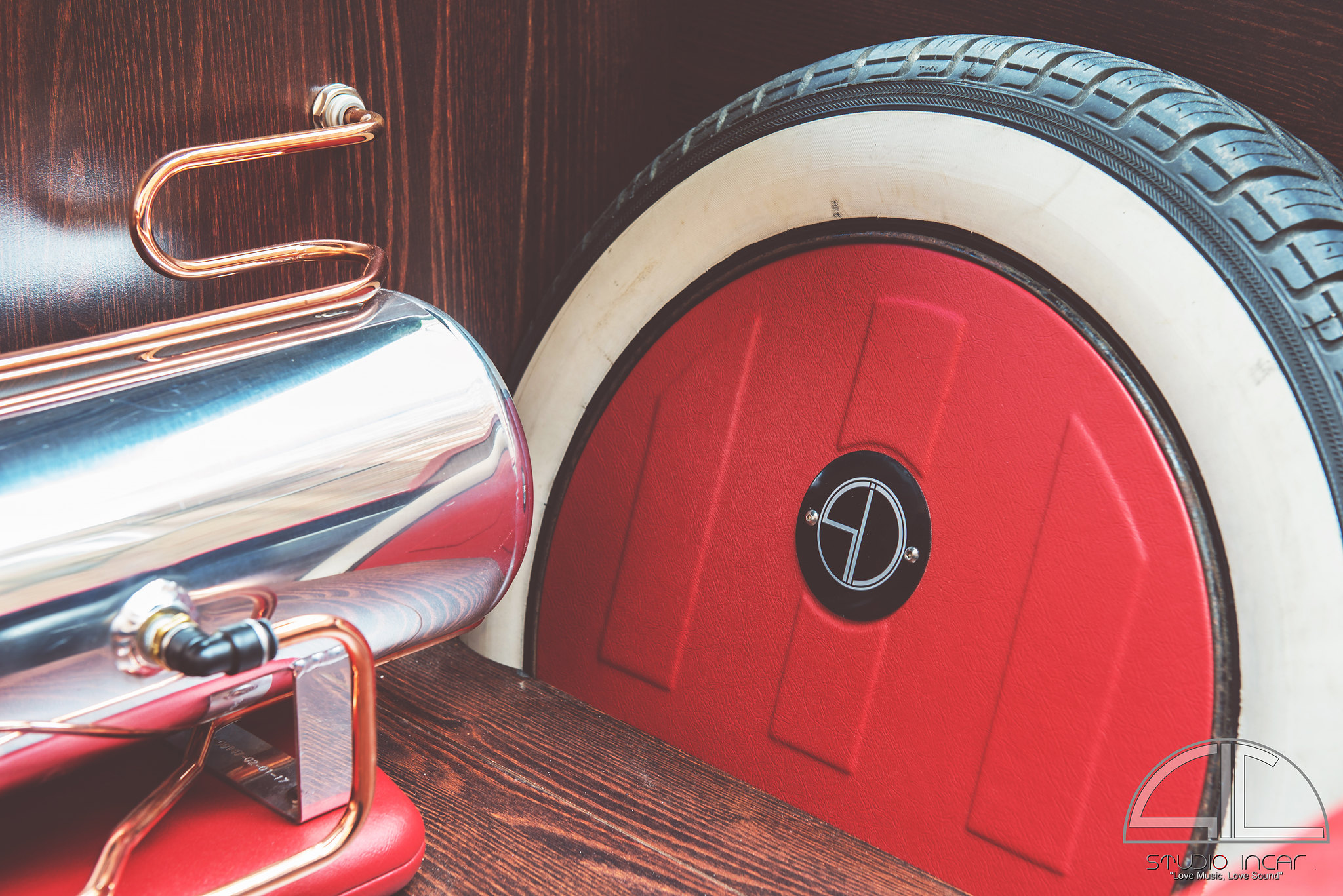 I’m pretty sure Ian knew where he was going with this build from the outset. We’ve been speaking for a long time, pretty much since everything died down form the previously mentioned situation (I genuinely find it awkward to talk about) about how we’re going to get to the end game.. This was probably early/mid 2014.

Here we are now, mid 2015 and our part of the project is done with for now. It would be a catastrophic lie if I was to say I estimated this job correctly. Huge respect to anyone that’s done one before and the handful of home build lad’s. The hardest car we’ve laid out by a very long shot. It took us a little while longer than we agreed also! (Sorry Ian)…

We started by stripping the car down and figuring out its under pinnings, they’re a strange breed with inboard front springs, outboard dampers and rear dampers mounted through he centre of the rear springs but not sharing a common mount, the spring has a typical seat atop the wishbone and the dampers bolts from underneath. Once figure out, all measurements where taken and we did some engineer’s drawings of what we wanted to make, these were more than likely completely out of scale although had exacting measurements written next to them, just like real engineers drawings right?

Regardless, here’s what came out of the other end of our magic machine – 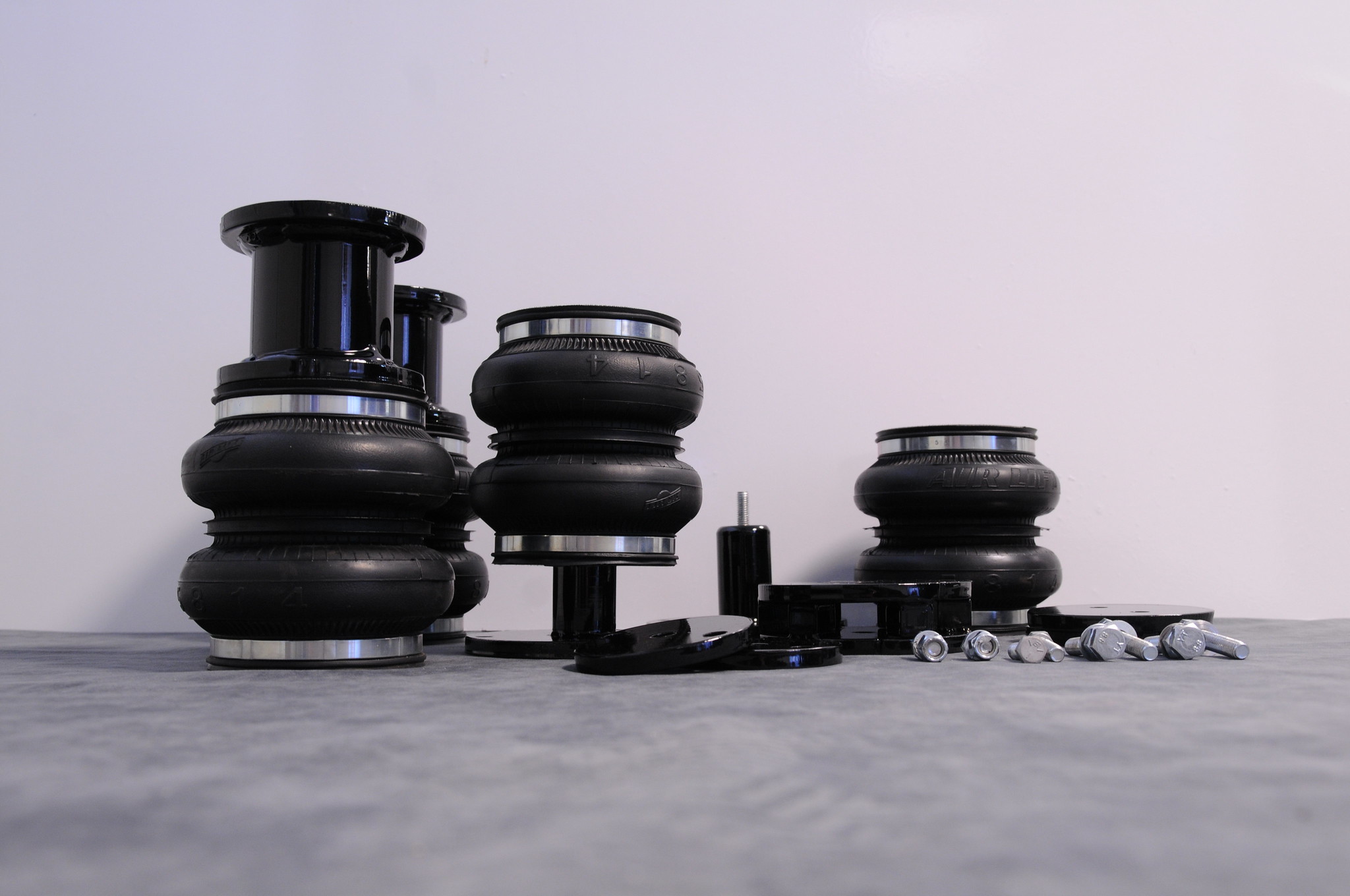 What we have here is a full set of custom mounts and bolts to allow the fitting of airlift double bellow bag’s in place of the springs.. Talking about the springs, they were no less than 600mm long, pretty much the largest spring we’ve removed from a car. It took a fair amount of measuring to ensure that the car would not only lay out but would also lift itself to a respectable drive height. It was agreed we would use Accuair E-level management for this project to try and keep optimum control of it’s heft.. It really isn’t light. Custom dampers were spec’d and made to bolt straight on.

The mounts are all pretty much 10mm steel, stronger than any other part of the car and then coated by our good friends at The Wheel Specialist Fareham, then treated to high tensile bolts. We kept all of the schematics so can suply a full bolt on kit for this platform should you like. It’s not a cut and dry installation as there are still parts of the car that need removing/cutting etc but is pretty DIY.. 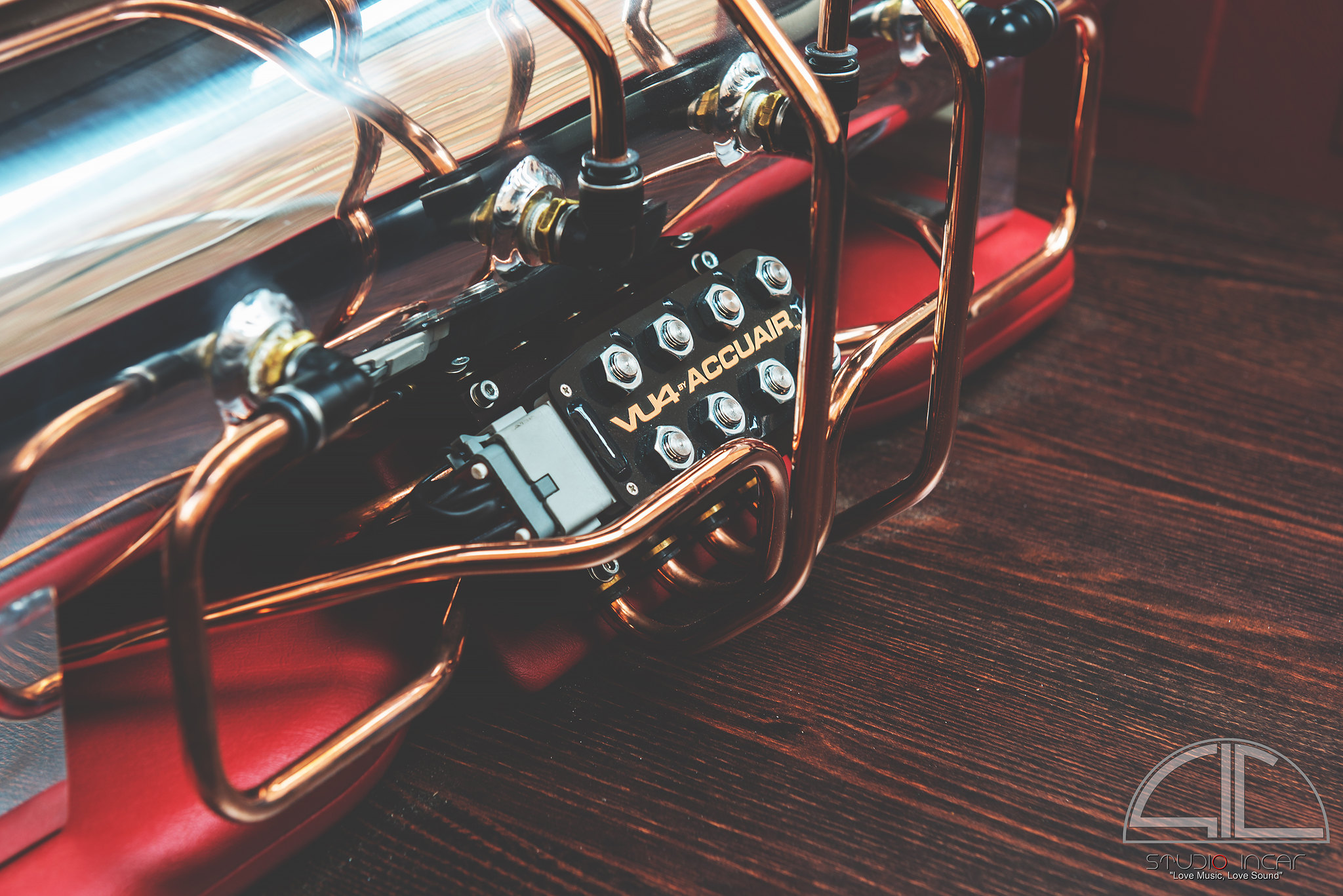 With the under side of the car tackled it was onto the boot. The brief was to use wood. Wood that matched the original wendge colour/style that flows through other parts of the car. We ordered in a special real wood veneer for this and edged the install with red piping to also carry the theme into the car. Veneers are not easy work, which is why you see a lot of bathroom flooring in the boot’s of cars, its made of vinyl/rubber and makes things much easier.. Anyway, this was all applied and pressed to sections we had pre fabricated in house to excellent effect. 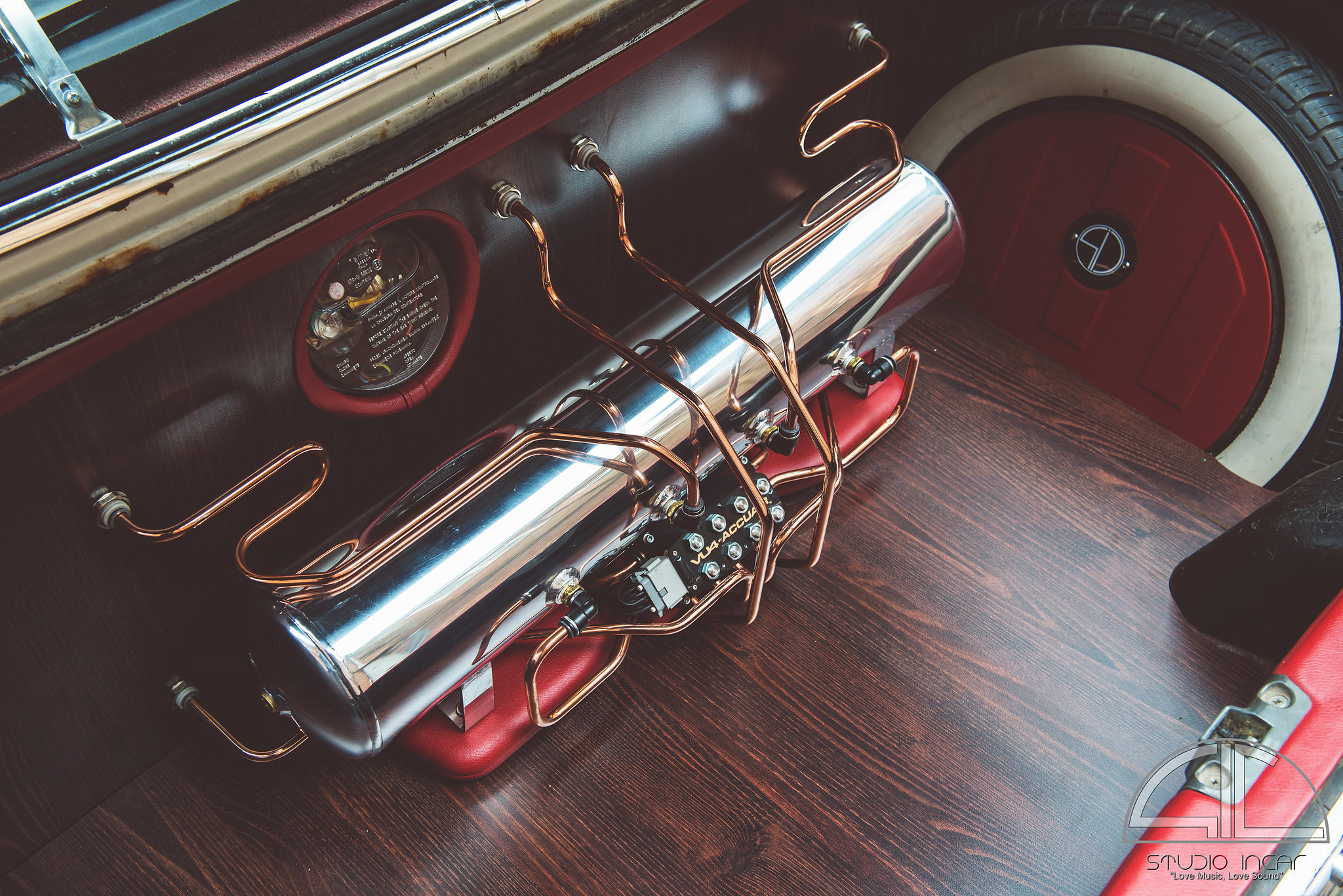 Piping was bent and polished in house and a mount was made for the Accuair VU4 manifold plus the polished tank mount double layered and then trimmed in the same matching vinyl. My favourite part of the install has to be the surround for the LPG display just above the tank and annoyingly off centre… 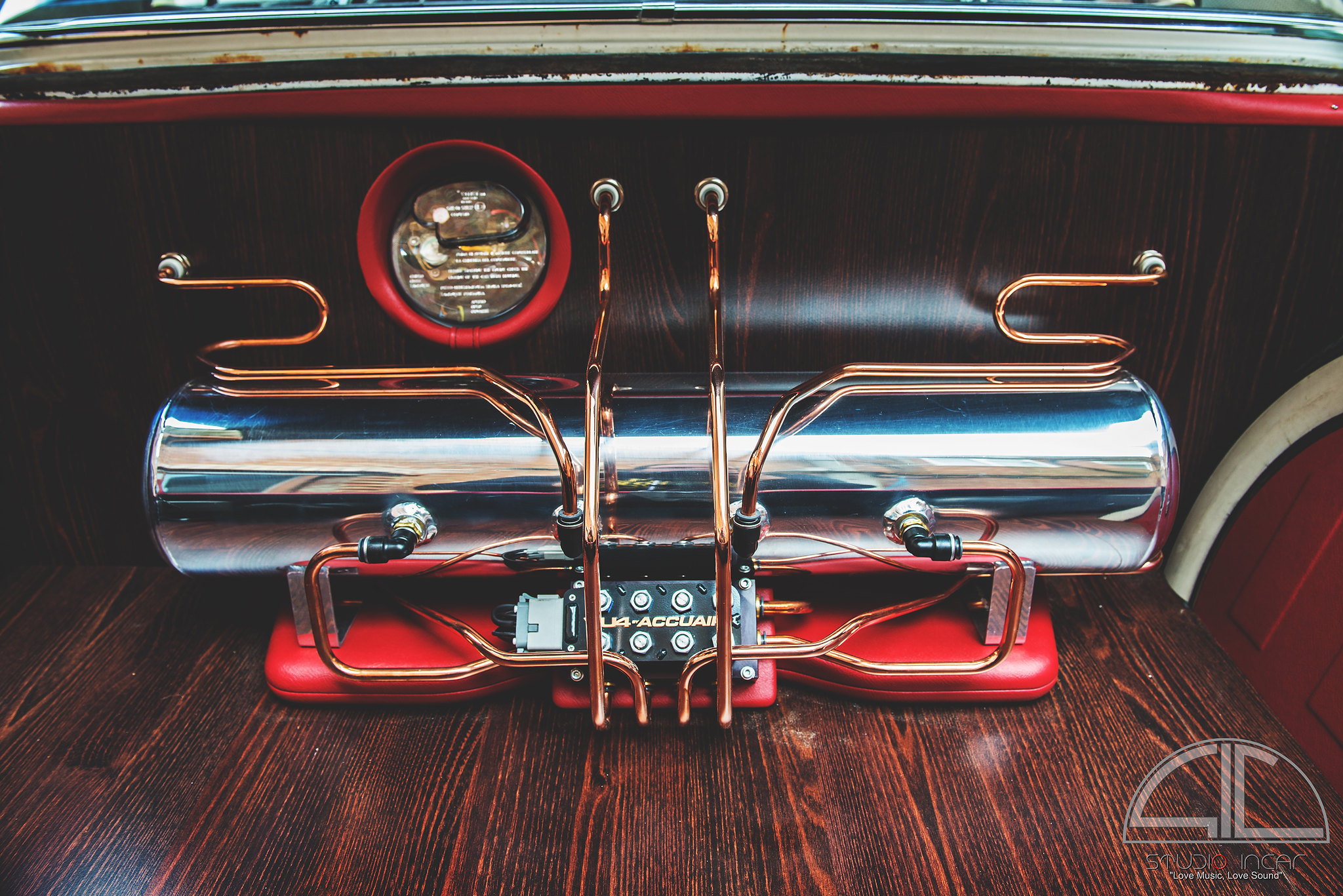 The spare wheel had its white wall tyre flipped so we could still mount it correctly in the boot and use an infill panel to make it more of a part of the installation than an after thought. 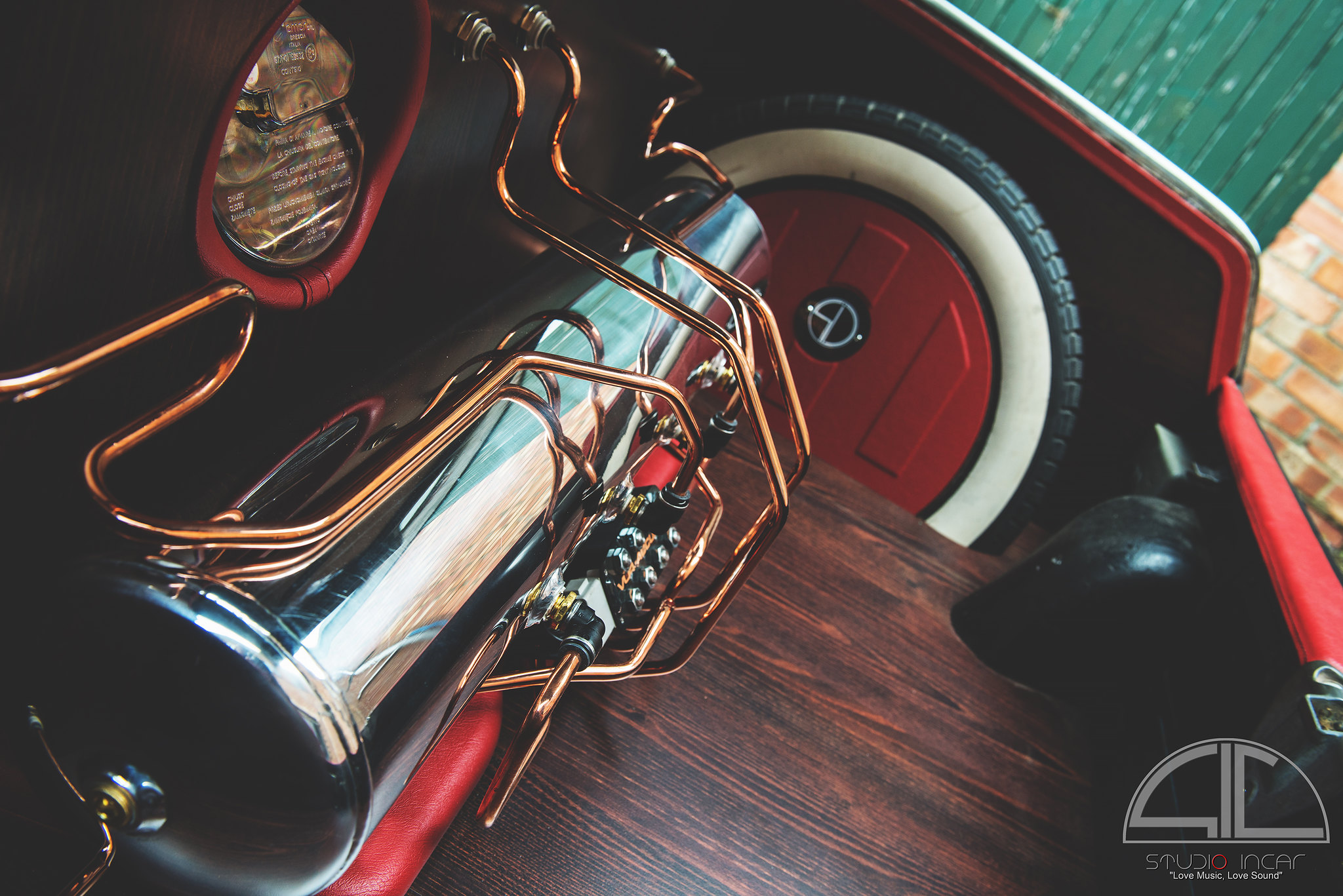 As you can probably tell from the pictures, the car as it sit’s is a little rough around the edges.. This isn’t the case now as this shoot was done a few months ago and the car has had a full on body resto in that time, so when shown/seen should be looking fantasic!

Anyway, I’ll leave you all to it for now as this was only meant to be a brief introduction of this entire project, we’ve done a whole load more than what’s been given away in this blog post and we believe a photographer has already been in touch about a potential magazine feature so we best pipe down for now… Take a look at the rest of Nick Williams (NWVT.CO.UK) fantastic shoot of our work on Ians great W114… 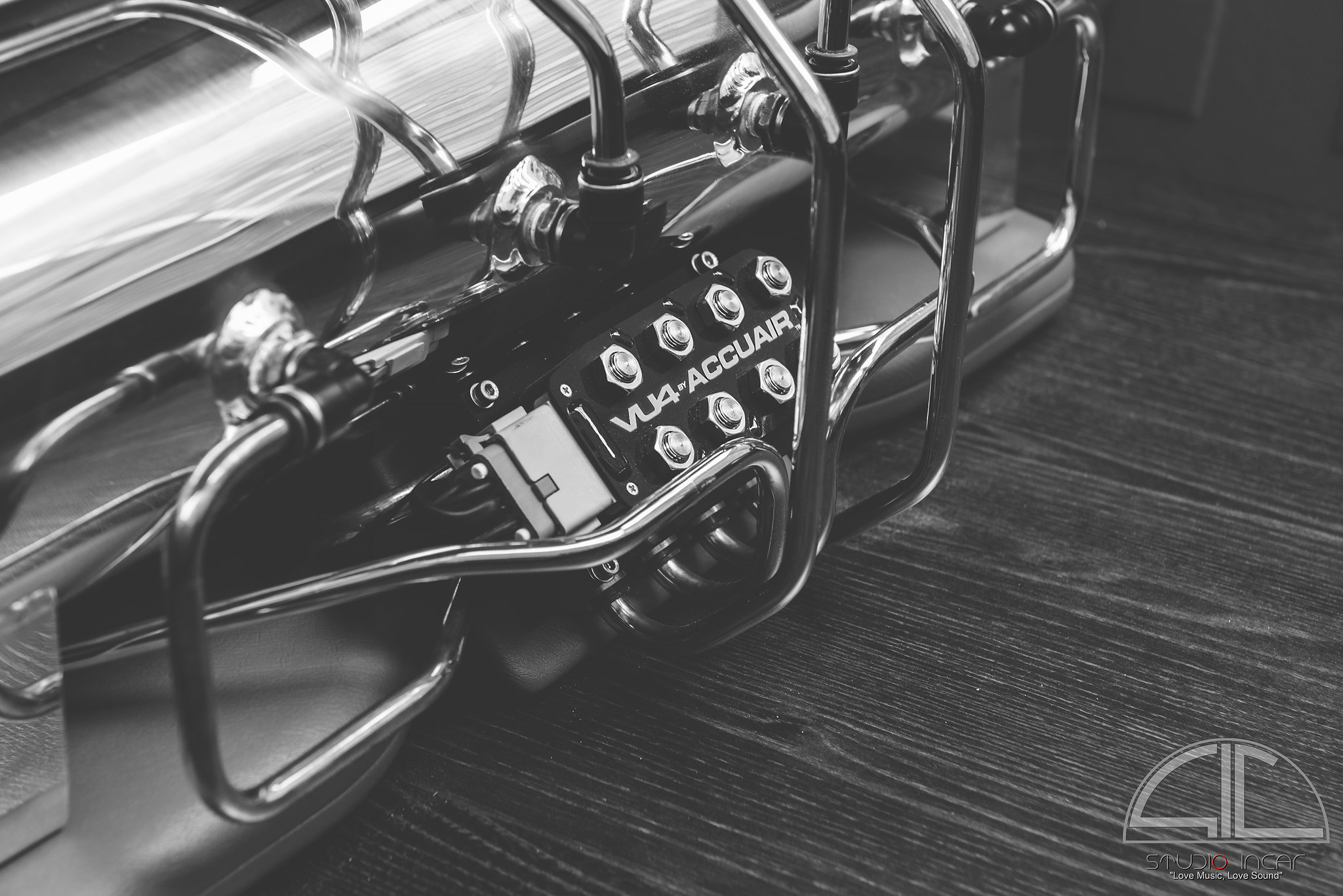 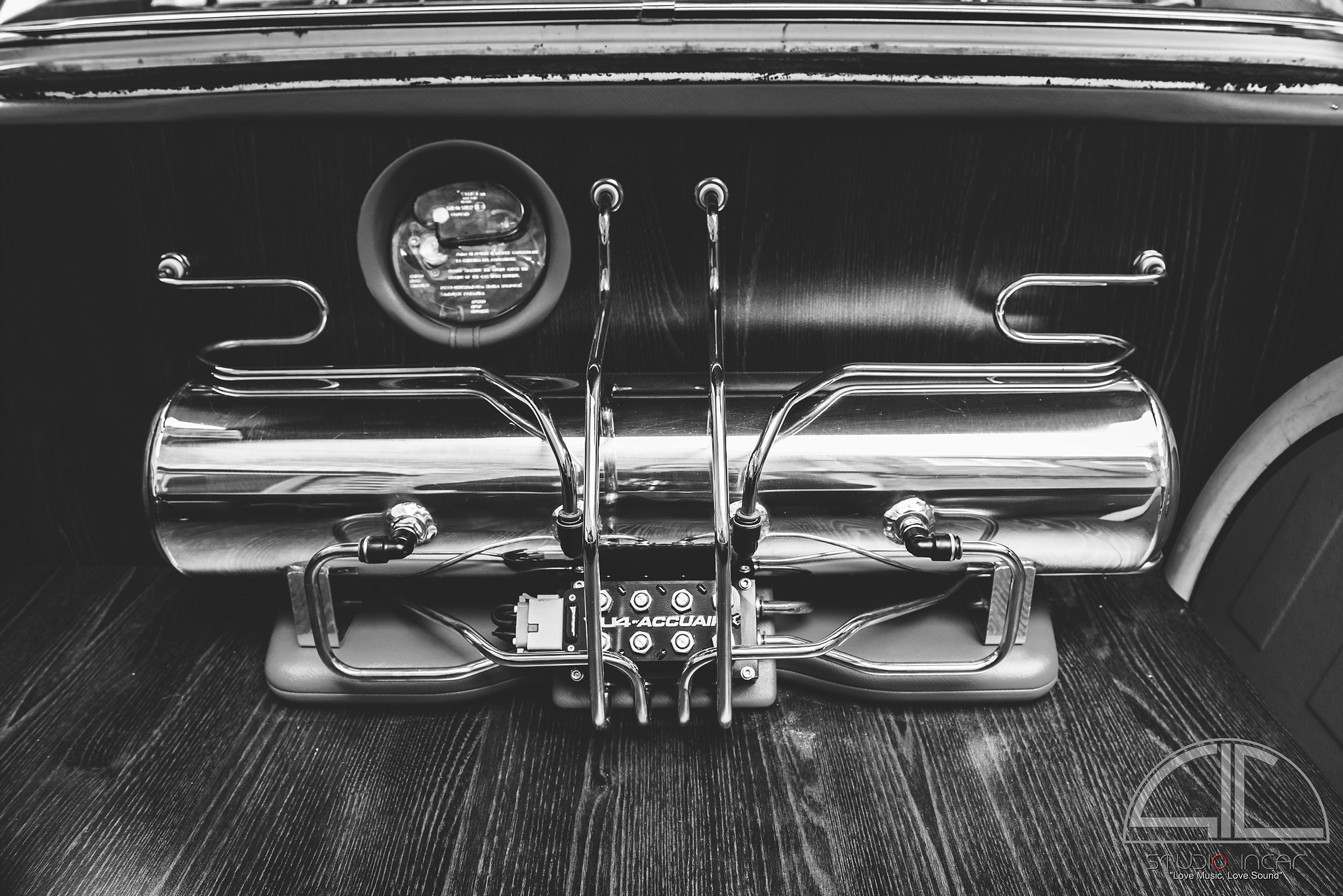 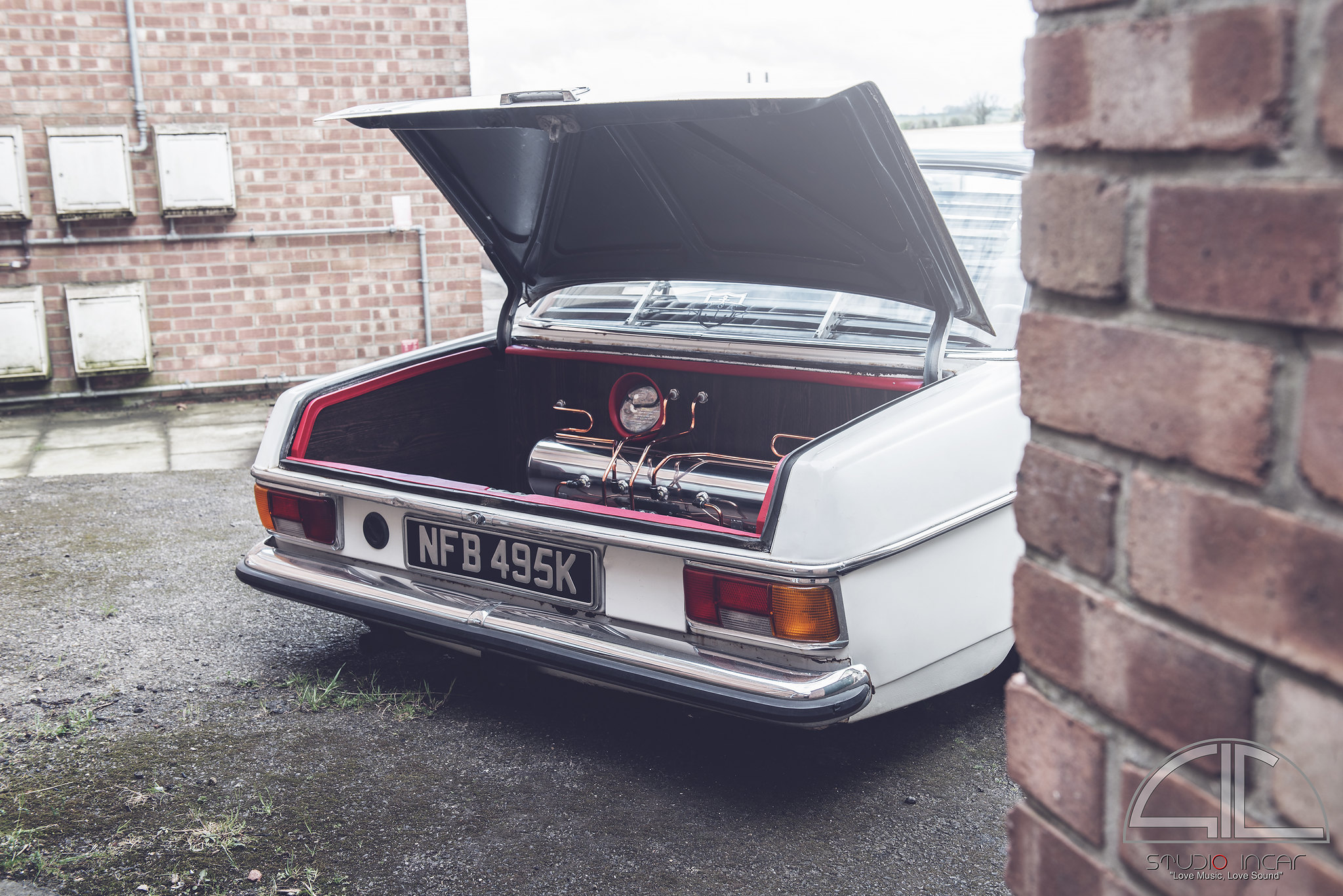 Thanks for looking, as usual we are real grateful for SHARING and LIKES on all forms of social media, FACEBOOK or INSTAGRAM so on… everything seen in our posts is available directly through us or in our online store up in the top bar. INFO@STUDIOINCAR.COM – 01489877987 – STUDIOINCAR/FACEBOOK