Bare with us, we thought the exact same thing. At first… A Ford S-Max with a High-End Car Audio System?

Upon receiving this Ford S-MAX the feeling within the workshop of “why this car?” was strong, much the same as most of our readers/followers will be feeling. We actually received a couple of calls and social media communication on just what was going on with this project which is understandable given our (gratefully received) level of clientele and usual performance car systems. Our explanation couldn’t be more simple. The platform couldn’t matter less to us, it could be literally any car/boat/truck and we will make something of it.

As the weeks went by, this car grew on us. The cars functionality is outstanding and it actually looks good, we’ll avoid the word “cool” for now but still good. The owner of this car, James, is well aware of what he’s doing and enjoys the fact that all of this work has gone into an S-MAX. Kind of a wolf in sheep’s clothing. He could drive what he likes really but this car fits perfectly into his lifestyle today, it’s a tool, a necessary one at that so there is justification to do what he likes to make it the most liveable necessary tool. As most car guys will sympathise, we’ll all find some form of justification anywhere we can scratch it from.

I must apologise for my poor show when first communicating with James, the original email was based around the new Jeep Cherokee, work was extraordinarily busy and our office internet service provider was acting up so James never actually received his reply/quotation until after the Cherokee idea was history. Regardless, we got there in the end and the S-MAX was to make the cut, a late model in white with all the frills which has turned out to be one of our larger builds of 2017. 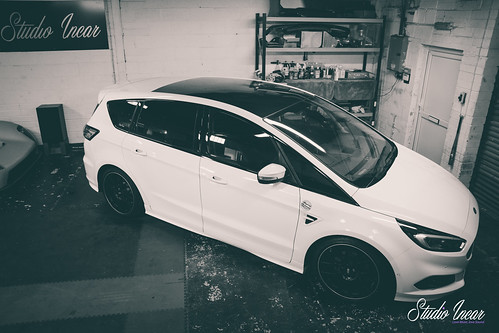 30+ emails deep and we have a plan, a pretty loose ‘blank canvas’ plan. We could do what we deem to be the best style/functioning install. Allowed that free reign we could come up with anything we like in terms aesthetics, installation and equipment. So…. We hid almost everything and kept 100% functionality of the car… The question needs to be asked as to what that actually says about us as a company. I think our reasoning for hiding everything when we could of and can build anything harks back to the impressive functionality of this car, again it’s purpose and pretty much its only reason for existing is to be a tool, if we can have everything we want, give James everything he wants and not affect this for anyone else in the vehicle then surely everyone will end up happy?

With a system decided on we set about taking the car apart. It’s worth noting these cars aren’t Fords of old, they’re well built and tricky to get apart. With doors, dash and rear quarters stripped we lifted the carpets to get the cabling routed properly. At this time we also installed a Tracker and Target Blue Eye tetra detection system, this system picks up transmissions of emergency service vehicles and gives you a good 500-yard warning that some unwanted attention might be about..

Cables laid – 2 x Optical cables, multiple twin cables, single 2ch RCA cable and 45mtr of silver speaker cable (active 6 channel front, four channel rear and sub) were strapped down. We installed a PAC Audio AMPRO4 between the factory head unit and screen, we had to import this from the US. The Sony system in these cars runs a digital volume control that is controlled physically at the head unit but actually works in the rear mounted amplifier from the mechanical knobs digital signal, without this module you will only ever be able to integrate (albeit badly) after the factory fitted amplifier. This is a no-no for us, the AMPRO4 gives us a fantastic 5v multi RCA output or a digital toss-link output, full range and linear. Exactly what we want to feed our processor, I was super impressed by this piece of kit. Headunit re-installed it was onto the fun parts.. 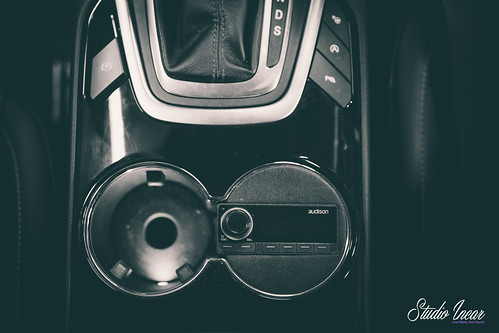 This DRC mount is actually interchangeable to the other cup holder depending on who’s in charge of the coffee.

Deciding to use 11 channels, 6 active front, 4 active rear and sub was on James himself. A request made for when the car is used with multiple passengers. Settings were pre-programmed into the processor for an SQ front stage only setting for a single person (driver) listening, a setting for all around sound and then a fun setting for output when you’re in ‘the mood’.

Processor in question is the new Audison Bit One HD, 13ch output, 192/24 resolution with multiple inputs incl 2x digital optical. Another reason for choosing this processor. We wanted dual digital inputs as auxiliary HD sources and to use the AMPRO as the master analogue input from the factory unit via the processors Master analogue input.

Our final installation saw the front speaker set being upgraded to Rainbows new Profi line including the crystal midbass, midrange and tweeter. The Hertz Mille legend components used initially are outstanding, beyond their price point, however, the Rainbow units pip them in every way and really shifted the sound up a notch. All things relative they have every right to given the difference in price.

One other modification to the original kit list was to change the amplifiers up from Audisons AV level amplifiers to Audisons Thesis level amplifiers. There are other channels of amplification hidden in case you wonder on the channel count. The class A thesis amps again changed the level of the project up to very special heights.

Original system specs as so (modifications throughout) –

Audison AV Due (Changed out for TH Quattro)

The two latter mentions in the list above, give us our two digital Hi-Res sources, the ability to stream Hi-Res from your phone or tablet and also a fixed digital input for the Astell and Kern DAP. The Astell is the star of the show in this install, being capable of silly resolution it just demands authority of the system delivering outstanding bass power and attack further up the bands. Very exciting to listen to. 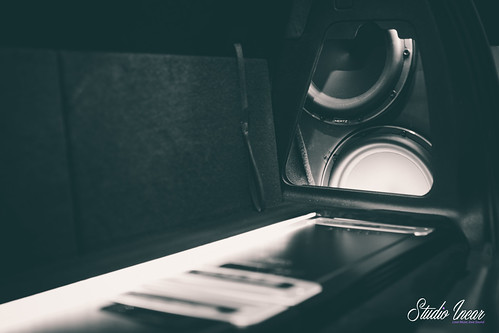 Going back to the bass from the system.. So this enclosure started in the planning stage as a whole panel replacement. To rebuild the rear right quarter interior panel, big job but nothing we couldn’t take on. Once everything was removed it was apparent there was a possibility we could make a two-part enclosure making a mould of the inside of the rear quarter and then the front edge, sealing them together like a clam-shell, the fascia is mostly birch ply, it’s a stepped front baffle design and after displacement of the driver measures to 1.4cuft. Slightly oversized which we’ve found these woofers love. The subs are the stand out feature in this car if I had to choose one, digging deep from 15hz up, clean, fast deep bass when needed, the added distance with them being 2.5m away from the driver helps. The whole enclosure sits behind the OEM panel, the grill section pops back on (removed here for the photo) and other than the sound you wouldn’t know they were there.

One of the only visible aspects of the system is the front pillar set up. The midrange and tweeter are mounted on a common baffle, custom made, aimed and then chamfered to limit early reflections. The midrange is allowed to play through into the dash space, the baffle is sealed to the OEM pillar from behind. The front quarter windows were tinted twice with a very high tint to ensure nothing can be seen from the outside. Insulation was used throughout to stop any nasties behind the drivers. 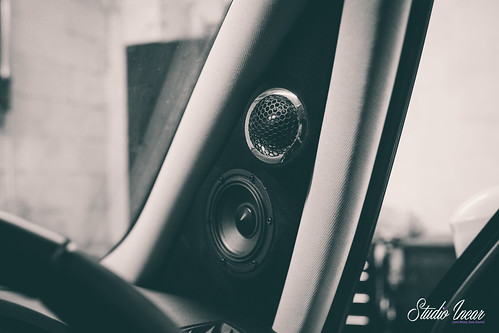 With the original S-MAX service cover in the boot covering the amp rack with enough freedom for ventilation whilst being suitably tough. When installed nothing is visible in the rear of the car. This rack is actually twice as deep as it looks with more amplifiers, not on display underneath. They take their cooling from the entry/exit vents in the rear panel. 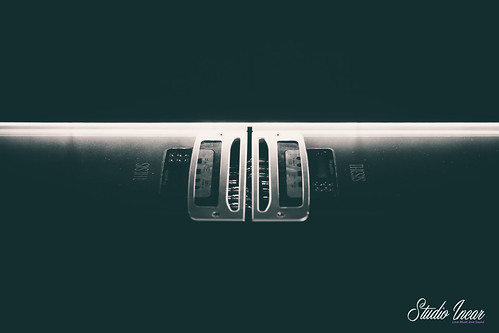 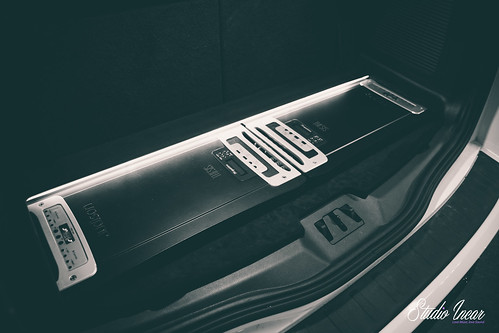 Our project approach worked out very well, we had a few firmware hiccups along the way and a couple of mutual decisions changed the path of the project slightly however the target was hit just as intended. Absolute SQ with a minimum footprint seems to be the flavour of the year for us, they’re the type of system that is all about the installation quality and sound which sits perfectly with ourselves. It was particularly difficult to mount things as they have been in this car, one fantastic thing about the S-MAX is just how functional every part of it is and to get this level of equipment inside this car even from a footprint point of view is pretty impressive if we do say so ourselves.

This was a highly enjoyable job, we feel privileged to work on such projects for such people. James was and still is incredibly happy with the finished product exceeding all of his expectations. We’ve already taken the next booking for James second car with us, we’ll go a little further this time…

Enjoy the rest of the images by our resident photographer and installer, Sam Dean (@c6mby), if you got this far then its worth a SHARE for us. As always, thanks for reading. 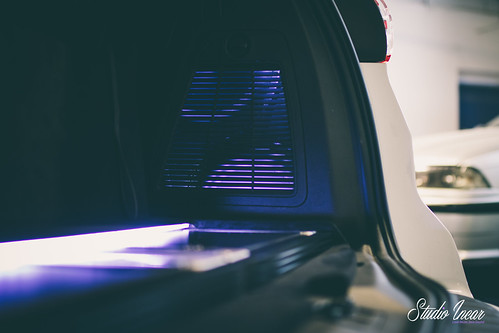 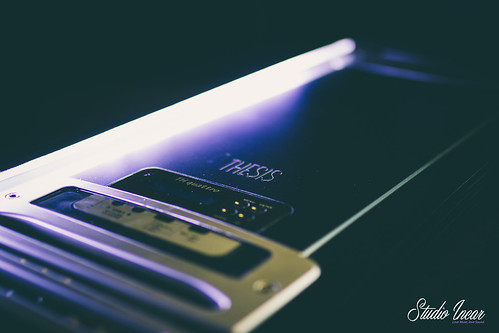 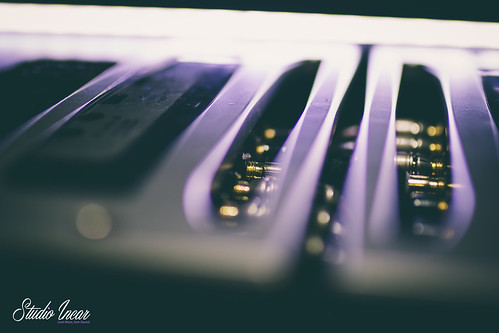